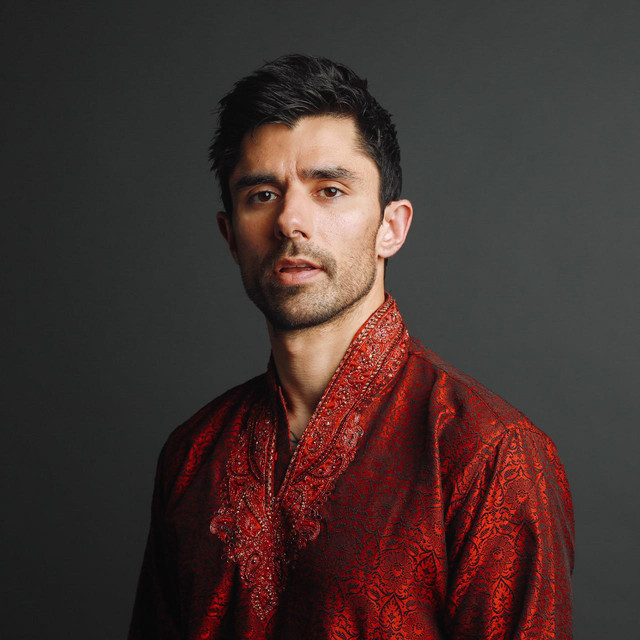 According to KSHMR, genius isn’t usually borne of a completely novel concept, it’s simply the fusion of two things that hadn’t previously been combined. For him, those two things were dance music and his Indian heritage.

The DJ/producer (real name Niles Hollowell-Dhar) built his career on this unexpected synthesis. His distinctive sound has led to a steady climb up DJ Mag’s Top 100 DJs list, starting at No. 23 in 2015 and securing his position at No. 12 by the end of 2020.

Over the course of his career, he’s become known for electro house beats and big room drops, but his debut album — Harmonica Andromeda — will usher forth a new dose of the unexpected.

If the first single “The World We Left Behind” is any clue, the forthcoming LP has more of a whimsical feel than the majority of the producer’s previous work. As KSHMR himself puts it, Harmonica Andromeda’s tracklist features “no EDM bangers.”

Even if the album — releasing today, March 19 — is a new chapter for Hollowell-Dhar’s music, he’s staying true to his roots as KSHMR, albeit with a slightly different spin.

“Story has always been at the core of the KSHMR projects,” he says. “In the beginning, it was maybe about epic blockbuster sort of stories, but [Harmonica Andromeda] is more like a kid’s hopeful dream.”

The story behind Harmonica Andromeda is straight out of a fantasy novel. According to Hollowell-Dhar, it’s an adventure story that follows a kid who starts out at a carnival and is led through a series of different worlds by a fantastical host.

“It’s exciting to go to a different world in each song,” KSHMR said. “In each case, I’m trying to get inspired by whatever that world is, whether it feels like the old West or it feels like Latin or South America.”

Another story the LP tells: KSHMR’s own. With the adoption of a hip-hop-reminiscent tempo, Hollowell-Dhar says that Harmonica Andromeda ties in elements from his early music days as one half of hip-hop duo The Cataracs.

“If I was one thing in the beginning [with the Cataracs] and then I totally 180-ed with KSHMR,” he says, “this album is like meeting in the middle.”

Hollowell-Dhar and friend David Benjamin Singer-Vine began making music as The Cataracs in high school. After graduation, the pair continued to create, first developing a reputation in the San Francisco Bay Area through collaborations with singer Dev, and eventually moving to Los Angeles where they were connected with hip-hop group Far East Movement.

This pairing would prove to be chart-topping gold when the two music groups released 2010’s electro-hop single “Like a G6.” The song peaked at No. 1 on the Billboard Hot 100 for three non-consecutive weeks and was RIAA-certified a 4x Platinum record.

“That really catapulted us to pop producer status,” Hollowell-Dhar says. “It was a weird fit honestly, because I was just a hip-hop producer who had a bit of a fluke.”

Fluke or not, it opened doors. Hollowell-Dhar secured producer credits on big-time projects such as the English-language portion of Enrique Iglesias’s 2014 album Love and Sex. Although he remembers his time working with Iglesias fondly, he ultimately found that the pop music wasn’t the best fit.

“It didn’t come as naturally,” he said. “Where I really excelled was being by myself and spending a lot of time crafting things. That’s what led me to dance music.”

Before KSHMR, Hollowell-Dhar worked as a ghost producer for several well-known DJs. When several of his ghost-produced songs blew up, he “took it as a sign that I could do it.”

So, in 2014, Niles Hollowell-Dhar became KSHMR. He signed with Spinnin’ Records and remained anonymous for his first few hits, including  “Burn” alongside DallasK. In 2015, he released “Secrets” with Tiesto, taking the moment to reveal himself during Tiesto’s Ultra Music Festival performance that same year.

In 2016, KSHMR released his debut EP The Lion Across The Field and graced the main stage at Tomorrowland, which earned him DJ Mag’s “Best Live Act” award. In 2017, KSHMR announced the launch of his label, Dharma Worldwide.

Harmonica Andromeda is his next chapter.

According to KSHMR, the forthcoming album was his first chance to get experimental and really dive into his process. What had previously prevented him from this type of freedom was never a lack of desire or of ideas. It was a lack of time.

“When I’m on the road and I only have a week back from shows,” he says, “it feels almost irresponsible to do something experimental as opposed to something that is more clearly going to be a single that I could finish within the week I have at home.”

The producer found himself with a plethora of free time when live events were placed on indefinite hiatus due to the COVID-19 outbreak. Quarantine presented a silver lining for KSHMR, allowing him to finish Harmonica Andromeda, which had been more than two years in the making.

“It was just a free-for-all with all the time in the world that I wanted to experiment,” he says. “It made me feel a lot more guilt-free about just experimenting and pursuing an idea that might not work.”

The result is a body of work that KSHMR describes as “very rabbit-holey,” noting that he’s always loved “getting into the little details and little ear candy elements” of a song.

If it’s not clear from his effusive social media posts and passionate press, KSHMR is proud of his work — and he had a great time making it. He’s poured himself into every melody, tempo shift and vocal trill. If we can be sure of anything, it’s that Harmonica Andromeda will be a deviation from the tried-and-true and a return to the unexpected.