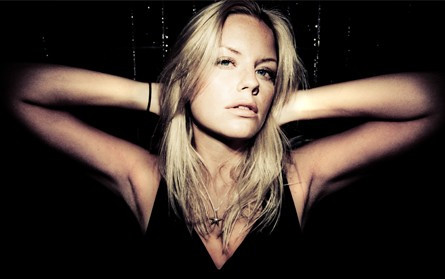 One glimpse of Ida Engberg and the classic James Bond theme starts playing in your head. A superstar of the international techno scene, Engberg looks like a ‘70s Bond girl—which is, of course, the best era of Bond girls.

Engberg is also a mother of three daughters, wife to techno royalty Adam Beyer, and a fearless activist for numerous environmental, animal rights, and humanitarian issues and efforts. Plus, she’s a gifted visual artist.

On a balmy Ibiza evening, where Engberg and her family have made their home for the last four years, she has returned from a twilight walk with one of her daughters. It wasn’t until her third child that Engberg scaled her DJing way back.

She toured while pregnant as long as she could safely do so, then, while she was breastfeeding, Engberg brought her daughters with her on the road. She traveled with a nanny, which allowed her to spend maximum hours with her children.

“I always thought, ‘when I have a child is when I’m going to stop DJing, because you can’t be a mother and have this job traveling the world,’” Engberg remembers. Today, her daughters are 10, 8 and 6 years old.

“If you compare it to mothers who have a nine-to-five job, they have to leave the kid at daycare and spend a lot more time away from them,” she says. “I played two gigs on the weekend, I brought my daughters, and I was only away from them for two hours.”

Growing up in Sweden, becoming a professional DJ was not always Engberg’s plan. She was focused on studying art and working as an assistant art director with the intention of going into the advertising industry. Back then, DJing was an after-school activity she did for fun.

Engberg was exposed to records and dance music early on through a boyfriend, and her sister who took her to Ibiza. On the White Island, she discovered the sounds of Loco Dice, Steve Bug, and Circoloco parties at DC-10. She played records for herself, and when a bar owner friend of hers who owned a bar in Stockholm needed someone to step in after a DJ canceled, Engberg was on hand.

She became a weekly resident at the bar and started getting bookings abroad soon after. One gig in Marbella, Spain, led to a whole summer there. She moved to Ibiza for a season in 2005 and upon returning to Sweden, started taking DJing seriously.

In 2007, Engberg released “Disco Volante” (not to be confused with the Mr. Bungle album from 1995). It was her first original production, and it came out on John Dahlbäck’s Pickadoll label. The Sébastien Legér remix of the track catapulted her from underground clubs to festival main stages.

“From when you’re a child, everyone always asks you: ‘What are you going to be when you grow up?’” Engberg says. “You have to have a good answer from when you are four years old. You would never say, ‘I’m going to be a DJ,’ because that’s not a serious job. This is why, for me, DJing was just for fun for so long. I always had another plan. Then you realize, you make good money. You could work a lot less. You could be with your children so much more than starting over, going back to school, or having a ‘normal’ profession.”

Staying home with her daughters inadvertently led Engberg to tap into other aspects of her creativity. She started painting with her daughters and found herself continuing long after they had gone to bed. Sometimes, she stayed up all night.

Painting proved similar to DJing in that she started it just for fun. Once Engberg shared photos of her paintings on social media, she received an overwhelmingly positive response as well as requests to purchase her work. She wasn’t selling them for the first few years, but she did recently sell a limited run of prints of her painting “Mile High Club.” It quickly sold out.

“This is how our world is developing,” Engberg says. “Over your lifetime, you can be five, six different things. It’s not like you have to choose one thing anymore. If you can do something creative that’s actually your passion and you can keep on doing that as a living, it’s amazing.”

Engberg now dips into the world of NFTs. Her first drop is a digital rendering of two of her paintings: the aforementioned “Mile High Club” and “Mother of Gaia.” She made the digital versions in collaboration with digital artist Ross Marshall.

Stills of "Mile High Club" and "Mother of Gaia" NFTs

“When you team up with someone who makes another version of what you originally made, and you have more energies working on the same thing, it becomes something really exciting,” Engberg says. “It’s like when you play back-to-back or go into the studio with someone. It’s two energies coming together.”

Engberg’s creative ventures tie into her activism. Her paintings carry messages of awareness about the environment, animals or nature. Her prints come on sustainable paper made with hemp, agave and bamboo, and each is shipped in sustainable packaging.

Her NFTs are minted and sold on the eco-friendly FLOW blockchain, which uses the proof-of-stake mining system of verification rather than the environmentally corrosive proof-of-work mining system. By using FLOW, Engberg uses roughly 1000x less power than she would using a cryptocurrency such as Ethereum.

Her social media profiles offer followers a wealth of easy-to-understand information on simply-explained critical issues. Engberg hopes her posts not only inform but rally her followers.

Engberg became a plant-based consumer when she was still a child and developed very firm ideas about what she supported early in life.

“If you have a platform, why not use it to talk about what you’re passionate about,” she says. “For me, it happened to be nature and animals.

“In the beginning, I got a lot of negative feedback,” she continues. “That just gave me more power to keep on doing it. I’m not turning down the music at a festival and having a political speech or talking about veganism. I would never ever do that, but I’m not on a social media platform to play music. We’re there to share thoughts and photos. It is an opportunity to reach so many people. [I’m] not telling people what to do, but telling them what I do and how I feel. If you don’t like it, you don’t have to follow me. In the end, ‘your vibe attracts your tribe’.”

Many organizations have reached out to Engberg asking her to act as an ambassador and raise awareness for their like-minded causes. She’s currently involved with Project Zero (not to be confused with the adoption agency) whose aim is to protect the oceans, as well as the wildlife conservation non-profit Music Against Animal Cruelty (co-founded by Art Department’s Jonny White), for whom she has DJed to raise funds. Engberg also supports Amazon Watch and the rainforests of Ecuador through Save the Paradise by posting on her socials and asking for donations.

She co-created the Techno for Humanity event raising money for Syrian refugees in Belgium. She is helping Tomorrowland with its environmental and humanitarian Love Tomorrow foundation, as well as Blond-ish with her Bye Bye Plastic Foundation.

The United Nations got in touch and has been holding productive exchanges with Engberg. She hosted a conversation with Steven Donziger, the attorney best known for his battles with Chevron and the damages their drilling caused for the people of Ecuador, which is viewable on her social media channels.

“Big corporations, who lobby the government and control the mainstream have so much power,” she says. “As individuals, you can only do so much, but the more people talk about it and the more people become aware and conscious, the more it creates a new political environment. You can always ‘be the change you wish to see in the world’ and spread awareness, but, in the end, we need to push for systemic changes.”

Engberg has seen these changes over her lifetime, watching as climate change and veganism moved from extreme niche topics—even controversial—to becoming mainstream. She’s observed firsthand how multiple artists speaking on a topic can gain momentum and lead to changes in practices. Today, festivals offer vegan food regularly, and at Amsterdam’s DGTL Festival, all the food is vegan.

She’s happy to see and be a part of real conversations about establishing a safe environment for women in electronic dance music spaces. Engberg has been very vocal about this issue, putting her support behind those who are actively working to take down the old guard culture.

“If I’m going to allow my daughters to go out, be free and party in Ibiza and all that comes with it, it’s our responsibility to use our voice to encourage people to stand up against the mistreatment of women,” she asserts. “People are in it to have fun. If you’re a little bit too drunk, or if you took drugs, you should still be able to be safe.

“Dare to be outspoken,” she continues. “Dare to say how you feel. In the end, we’re all just one person, but if all of us dare to speak out about how we feel, that leads to other people talking about the same thing. In the end, it gains some momentum. Many outspoken people lead to systemic changes at the top.”