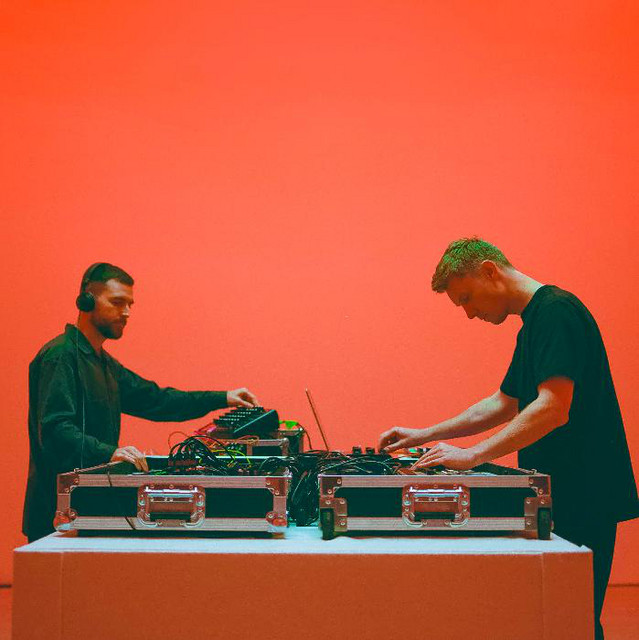 Bicep are nerds — there’s really no tiptoeing around it. Andy Ferguson and Matt McBriar’s obsessive nature and attention to detail has been apparent since their introduction to the public by way of the Feel my Bicep blog.

Since the deep-cut fixated site was founded in 2008, the duo's instincts have continued serving them well, and the Belfast boys are now better known for their own original productions and rowdy DJ sets than they are for being dedicated crate diggers.

The pair’s ascendant trajectory from penning cheeky blurbs on obscure Italo-disco heaters to tearing crowds apart with sought-after unreleased tracks has been propelled by the particular ambition they bring to all of their projects. Breakthrough successes, like 2015’s “Just” and their self-titled 2017 LP, saw underground sensibilities pierce mainstream concerns. It's a delicate balance that speaks to their wide-ranging influences.

The curation behind Bicep’s written word and sound extends to the duo’s vision as well. Their live concerts offer brain-bending visuals, and the imagery of their logo and nostalgic “Glue” music video have become as integral to the project as its music.

Isles, their forthcoming sophomore LP, is a natural progression of these principles. The record was explicitly designed as a double-barreled experience; its ornate production making for a captivating home listen as well as a contrast against the more punishing versions produced for live gigs. The album was conceived as a continuous feedback loop of electronic music, with solitary spins and communal experiences comingling to create a more complete picture.

“It was meant to exist alongside touring,” McBriar says of Isles while video conferencing from Bicep’s London studio.

“It was always meant in two parts,” Ferguson adds, noting the live show “was very much core” to the production of Isles. “I remember thinking we didn't play lots of tunes from the album within the last live show. So [recording Isles] was like ‘We wanna be able to play every tune on the album -- if we can -- live.’”

Much to their surprise and disappointment, they couldn’t. Bicep was set to perform live for the first time in more than a year at London’s O2 Academy Brixton at the end of March, just around the same time the COVID-19 situation dramatically deteriorated around the world. The shows were originally rescheduled for August. They’ve now been pushed to the non-specific date of 2021.

At least one thing went ahead as planned: “Atlas,” the hypnotic first volley from Isles, was released in late March.

Facing a much quieter 2020 than anticipated, Ferguson and McBriar were left in an uncertain purgatory with a club-centric record and an abandoned tour along with it. They wound up filling the void the same way seemingly every enterprising DJ has this year: they organized a virtual gig.

Dance music livestreams have had enough time to settle into a reliable template. Most appear in front of a window, record shelf, or recording studio from the vantage point of a fixed camera angle. Occasionally, a goofy background prop or knowing smile is flashed to acknowledge the absurdity of the situation.

Bicep’s spin on streaming broke from the established mold. Teasers trickled out in August of an audiovisual event set for September. They swapped turntables for live instrumentation, and the virtual show was ticketed. It was advertised as a one-time only deal. It would not be rebroadcast or archived on YouTube.

“The original idea was, we’d get a couple of iPhones, we'd set them up in the studio and we'd perform a few tracks from the upcoming album,” McBriar says, noting he and Ferguson wanted to give people “a flavor of something beyond just posting a little 50-second clip of new music coming."

As restrictions eased in the UK, they reevaluated the plan, seeing a chance to put more thought into a digital performance that would meet the high hopes they’d had at the start of the year.

“It was just a case of getting some of our crew back together,” McBriar says, “and working on something that was bigger than just the music.”

The end result was a spectacle of the highest order. With the help of longtime visual collaborator Zak Norman, otherwise known as Black Box Echo, the hour-long stream took viewers on an optical bender.

It begins unassumingly with a shot of the pair fiddling with their gear on a white dais against a clear backdrop. It isn’t long before things get loopy to the climactic moments of Isles cut “X” and the entrance of strobe light-esque distortions. Things only escalate from there, winding through barnstormers like “Aura” and “Glue” as well as unreleased cuts from Isles and even “Niio Rhythm,” Bicep’s chaotic collaboration with Benjamin Damage under the name BDB.

The display didn’t look all that different from what an E’d up raver might see during peak dance floor madness. The pair’s corporeal forms dissolved, alternatingly finding themselves outlined by cyan geometric frames, divided into fractal patterns, or rendered in infrared imagery.

McBriar says the brazen presentation was meant to riff on the surface mundanity of watching two men manipulate sound and twiddle knobs in isolation. He describes the scenario of performing against a plain background as “brutally clinical,” a means of presenting Black Box Echo with an effective blank canvas to undermine audience expectations.

“The live show isn't just us,” Ferguson says. “It's the lights, it's the visual experience.” Black Box Echo reconfigured the raw footage using customized programs and vintage analog gear. “We've got a specific style that he works with, and to be honest, the color palettes and stuff he uses -- it’s amazing.”

There are several scenes with no signs of human life. The screen fills with unnatural colors ripped straight from a DMT vision, or Arthur Russell and Nine Inch Nails album covers. Once the onslaught of colorful freak-outs and the barrage of Bicep iconography ends, things come to a close with the duo breaking their stoicism to chuckle and walk off-screen. After folding in on itself and transforming several times over, the show ends with the same straightforward establishing shot it started with.

“We're at this stage now where Zak just blows us out of the water every time we do stuff together,” McBriar says. “It's just like ‘Whoooaaaah, this is better than I thought.’ We just agreed let's make it super simple and give Zak the most easy palette to work with. And I think that worked out well: just the boxes, us, and the white room —that's such good material to play with.”

They were admittedly uncomfortable in the uncharted territory of livestreaming, but Ferguson and McBriar consider the final result a triumph. Fans agree. People tuned in from more than 70 countries across five time zones. A month on, it’s not uncommon to spot requests for a recording of it in dance music-minded corners of the internet.

With one successful stream under their belt, Bicep are planning another close to the Isles January release. As is the case with Bicep’s larger output, they’re pleased to take a familiar formula and reimagine it within their distinct perspective.

“We really wanted to get that feeling of occasion,” McBriar says. “That's why we were like, ‘it's not going to be streamable afterwards.’ Not giving people the choice to watch it any time, anywhere, any day, created that thing of excitement.”

“It's like a collective live event,” Ferguson says. “Just the way electronic music and DJ sets have been consumed online, it's like everyone gets whatever they want in a sense.”

Rather than contributing to the ever-expanding sprawl of instant availability to all things ever made, the goal was to create a collective memory and evoke a shared sense of spontaneity decidedly missing from the COVID era.

“Trying to add to that and then create an event from it,” Ferguson says, “was definitely the hardest part to put together.”

Beyond refining their approach and preparing the new album, the pair keep busy tending to a personalized Spotify playlist of favorite tunes and assembling the monthly Feel MyBicep Radio program on Apple Music. They see both curatorial endeavors as logical successors to their blogging days.

Bicep is acutely aware of how their nostalgia-laden aesthetic resonates with listeners during a moment when dance floors are simultaneously frozen in the past and sealed away in an unknowable future.

“Context often affects music,” McBriar says, referencing the “Glue” music video’s melancholy remembrance of raves past. “The music has a different meaning now than when we made it. People at the time were pining for the ‘90s, and now people are just pining for 2018."

Although they’re reluctant to make any bold predictions about what the future holds for dance culture, Ferguson and McBriar are hopeful about the larger community’s ability to look after itself and endure the pressure of tough times.

“The arts have always survived these things,” McBriar says. “The arts transcend wars. Dance music's always had to be progressive. It always has to move with the times; it's a futuristic idea. My hope is that, maybe through all of this, lessons will have been learned — there has to be some positives taken from it.”