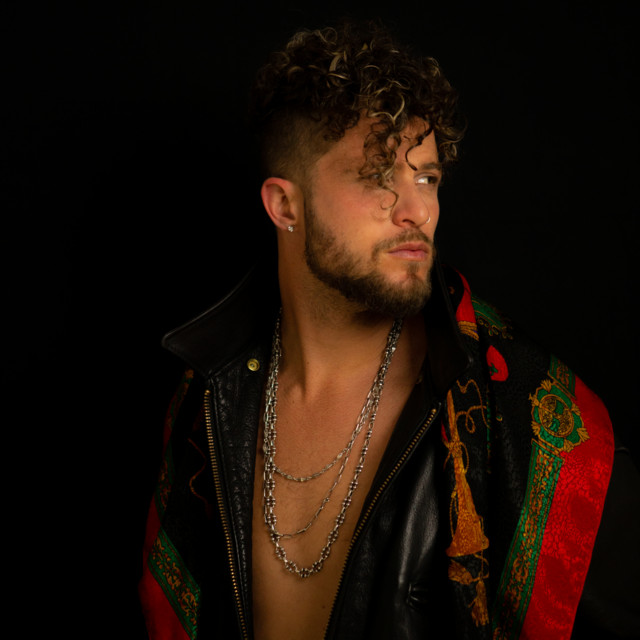 After a year riddled with uncertainty, Swayló (real name Noah Kessler De St. Croix) is kicking off 2021 with positive intentions.

The Santa Fe-based artist has played many roles throughout his career, starting first as a talent buyer for C3 Management before moving into event curation and music production. His soundprint is equally multifaceted, with notes of deep house, tribal techno, hip-hop and trap, weaving their way into his spiritually enlightening sets. Whether on the playa, in the jungle or packed tight in a collective meditation room, Swayló's groovy cuts heighten the vibe.

His latest track, “Ascension,” uses the moon cycle as a guiding force. The globally-inspired production incorporates sounds he remembers from his childhood growing up on a quaint, southwestern pueblo.

The galvanizing tech-house cut features an energetic drumline, mysterious flute and other ancient instruments set behind uplifting lyrics that urge listeners to tap into their higher selves.

“We’re going through this major transition in the world,” he explains. “It feels pretty dark and heavy in a lot of ways, but I think there’s also this ascension where we’re leaving these negative ways and patterns behind and emerging to this place of pure connection with ourselves, others and the environment. The song is a tribute to seeing the light through the darkness -- that there is always going to be this shadow side of us, and we don’t have to suppress it but instead embrace it, and breathe through it.”

It’s been a year of re-centering for Swayló, who also serves as the talent buyer for Santa Fe’s experimental Meow Wolf venue.

Prior to the pandemic, his primordial productions garnered a loyal audience that filled the popular art space during his Swaylo Nights event series. When doors shuttered, he repurposed his promoter skills to organize a series of socially-distanced drive-in events in the Chicago area.

He’s bringing some of that focus back to the studio, and hopefully with a little collective resolve, to a safe dancefloor near you soon. We spoke to Swayló to learn more about what keeps him inspired and what fans can expect in the months to come.

Where are you from and what is it like?

I’m from Zuni, New Mexico -- it’s a small pueblo. My father was a doctor on the medical reservation, and that’s how we were able to live there. It was a super rich youth having the experience of growing up with the Zuni people, with Zuni friends and being somewhat inside that culture and lifestyle. It was very beautiful, sacred and enlightening. Then there’s the nature element of New Mexico, lots of very rural, high-desert scenery.

Who introduced you to dance music, and what were your first impressions?

The Zuni ceremonial dances would be my first impression of music and dance. My parents were into trance music as well. From an early age, I was inspired by my parents’ interest in trance and dancing with trance music. I think my first impressions would be the power of storytelling and connection with the body, mind and spirit through music. People say music is this universal language, and I totally agree ... but it goes beyond that. It’s the language of the actual universe, spirits and potential other entities. Music is how we communicate with fire and the elements, too.

What's your favorite album of all time, and how does it inspire you?

The [self-titled] Bueno Vista Social Club album back in ‘97 really fucking hit it for me in a lot of ways. It was just so epic. I don’t have a favorite, but that one was super impactful.

What's your favorite track you've ever made and why?

As I’m embodying the release of “Ascension” and what it stands for, I’d say this one for now. I like the diversity in it and the message. It feels empowering and enlightening of connection. In terms of the production, what I’m going for is this global sound [that’s] rooted specifically in tech house vibes. The song does feel like it would be a good one to hear at a festival when you’re walking with your friends -- it reminds you that we’re alive. That’s inspiring. It has that energy to it, where it has both the futuristic elements but also this ancient ritualistic, ancient sort of flute drop. [I’m all about] mixing analog organic sounds within the futuristic, digitized Ableton process.

What must-haves do you keep in your studio?

Classic Retro sample stuff, with the TR-909 acid synths, Roland keyboards like the D-50 for pads and chords, and then 808 emulation synths. The last one would be the Roland Juno 60. Recently, I had to turn my studio into a dog room (laughs) and had to break it down, but I’ve been building out the studio for five or six years now.

What's your favorite hobby outside of music?

On a personal level: self-practice, self-cultivation, breathing exercises, meditation, yoga… I definitely love those things. In the morning, these practices put me into a non-judgemental place that I’m able to think back to throughout the day. On the other hand, I love work and creating, so I guess, with Swayló, it’s the music, but it’s also creating all of the art and branding. I love that aspect of [the project]. It helps me a lot to be creating this world symbiotically with the music, graphic arts and digital arts. I have worked with a few different people here and there who have been important in the process, but 80 percent of the design I’ve done myself.

Two other things would be fashion, and creating a fashion line within this project which we’re dropping in sync with this release. Pieces are made with Peruvian organic cotton. There are some super nice t-shirts and pillows, too.

The final thing is creating events. The events experience is just so incredible. It’s an art to start with a blank canvas and apply the tactical details. It’s like making music -- channeling a broad abstract into something produced meticulously. In Austin, we were hosting meditation and music events frequently, and we had a lot of people coming. We did it again in NYC, Denver and L.A., and it brought the same types of people together in these cities. We’d sell 40 $40 tickets to the meditation and the party, and another 300 tickets for just the party. Those 40 who came for both were the Jedis of the party. Their vibes were so high!

What do you want people to feel when they listen to your music?

I want them to feel love, and, like I said earlier, a connection with themselves, others and their world, their universe, their environment - just to feel empowered. It’s unified healing.