Mixed reality has been an ever-expanding topic off the back of the pandemic, particularly regarding live-streaming and artists. A company at the top of their game and one that is pushing the boundaries in this space is Volta XR, a technology that was named one of TIME Magazine's best inventions of 2021 and has the backing of electronic music heavyweights Deadmau5 and Richie Hawtin.

The technology has been exciting and valuable to artists from all backgrounds, not just those with a budget. Volta has positioned itself as a technology that is democratizing mixed reality and one that is accessible to all artists. Most recently, the technology debuted at this year's edition of Glastonbury, seeing Bonobo, Jamie Jones, and TSHA utilize the software during their performances. Off the back of the festival, Volta XR announced they have received a $500k grant from the government-backed Innovate UK agency.

We discussed Volta's journey and the emergence of the tech with co-founder Mitchell Bayer Goldman. 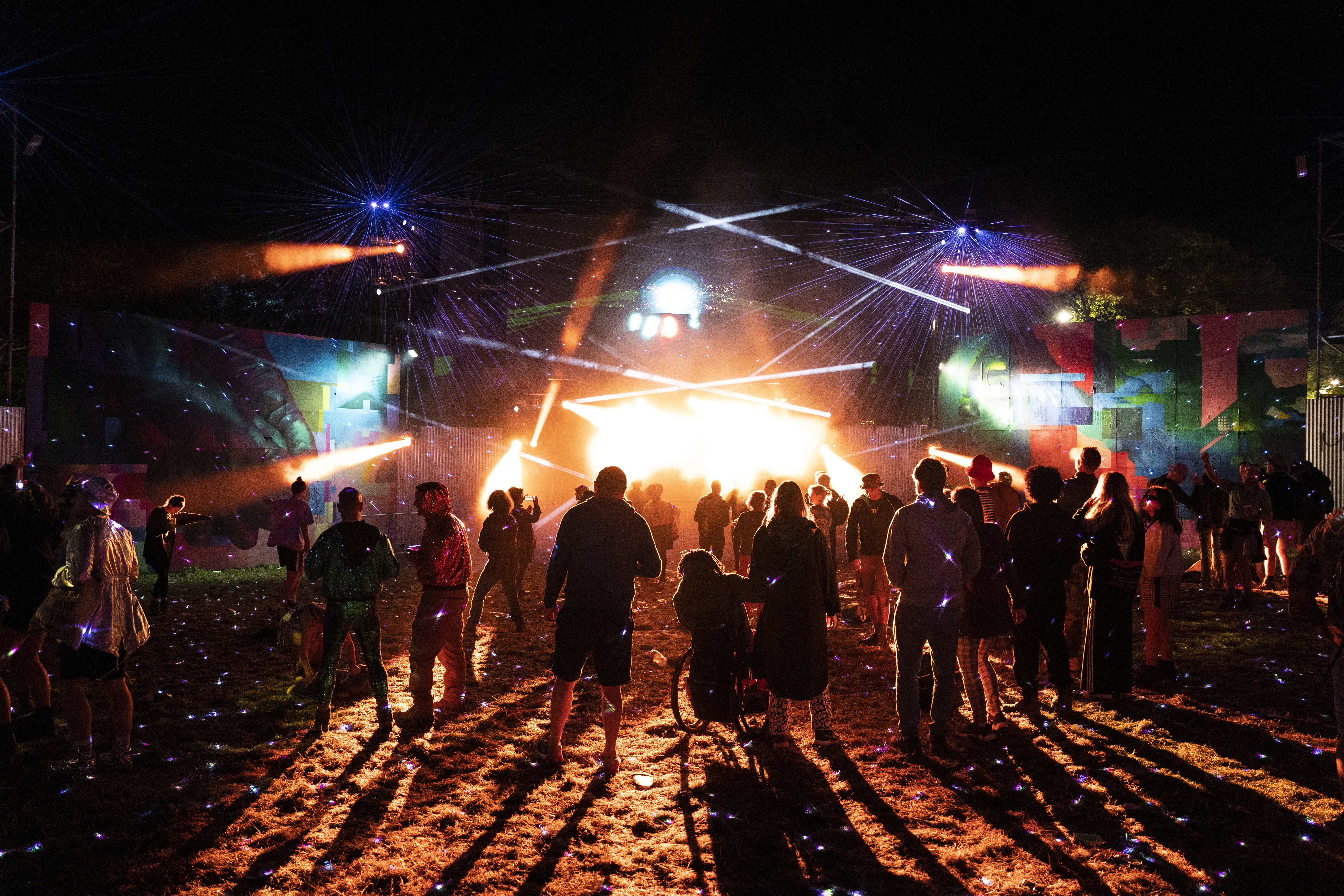 We were originally inspired by what was happening across the music space once lockdown took hold. The world's biggest pop stars started to create virtual or mixed reality events, with names like Lil Nas X in Roblox and Ariana Grande in Fortnite making a dent.

Touring managers looked with envy at the viewership numbers (including the astronomical 54 million across Travis Scott's Fortnite event) and realized it would take 200+ sold-out stadiums to get anywhere near the same level of reach.

Very quickly, it became apparent that they'd need to spend big to engage fans with something compelling. It currently costs several hundred thousand dollars to create a mixed reality experience. Not only that, but it has six months of lead time, complex hardware requirements, and needs a large-scale production crew.

Our initial solution primarily focused on helping those livestreaming compete with the well-funded high-production products, all through a self-serve tool that took visual production out of the studio and to the laptop, akin to what Ableton did for music production.

As the pandemic has receded, the problem we're trying to solve has become even more apparent. The cost of visual production, from anything to a music video, to assets live on a screen at a festival, is incredibly expensive and largely goes in the bin once used. This can all be solved by building content in Volta for free, which can then be iterated across shows.

How long was the project in development, and what were the most challenging parts to get right?

The project essentially took off in March 2020 when we converted the initial prototype into something more usable with the help of our amazing CTO, Yuli Levtov, and CPO, Will Dixon. The project was in stealth mode until March 2021, when we started hosting invite-only VR-first events in our Oculus app. We moved away from VR pretty quickly after noting that the market size for fans wasn't there. We also noticed how an inherently social experience, like a festival, makes fans feel more lonely when replicated in VR, given the avatarization of friends and a lack of sensory input in a vast space. Moving to a broader XR context was relatively straightforward as we'd already been thinking about how to host compelling streams on 2D platforms like Twitch, leading us up to our public beta launch in September 2021 with an in-person Boiler Room festival.

The hardest part to get right is that we're trying to create a 3D tool for the music industry. 3D design isn't necessarily an inherent skill for most designers. So, creating something powerful enough to work for artists across a plethora of software (including Traktor, Ableton, and Resolume), while being simple and intuitive enough to create experiences quickly, has been our focal point throughout the product development journey.

The concept and idea of Volta first came from your University days, correct?

Volta began as Alex Kane's thesis project during his master's program in innovation design at the Royal College of Art and Imperial College London. It actually started as a VR interface for spatial audio studio production. Before his master's, he worked in the music industry for big electronic musicians. He was more interested in the performative side of the music industry than recording, so he began re-conceptualizing Volta and the merits of XR (physics engines, gestural interfaces, etc.) to what it could in the context of big spectacle events.

What is the main functionality, the USP, and what makes this such essential tech for events and creators?

Volta is a self-serve XR creation platform that allows musicians, artists, and creators to design and broadcast 3D experiential content. Volta integrates seamlessly into artists' existing workflows, allows them to build immersive worlds, and can even let their fans impact the environment, turning a broadcast into a living, breathing place. Volta is free, mitigating the complexity of building next-level mixed reality performances and the seven-figure costs of a state-of-the-art production studio.

Using Volta means creators can essentially create hyper compelling experiences, displayed live on projectors and LED screens and streamed simultaneously to any streaming platform. In addition, our USP cuts out the cost of production, brings native audio-reactivity by plugging into music tools like Ableton and Traktor, and can add global scale to any event.

What would you say the advantages are for fans? What can they expect from the experience?

Fans can interact and have a meaningful impact on the visual content of an event and stream. Music game engines like Volta render entire 3D worlds. This means that live in-venue and livestreaming audience members can have control over any object within the virtual environment. Fans type keywords chosen by the festival, artist, or label into the stream's chat window or your festival's mobile app. Those keywords trigger effects (as chosen by the festival or artist) in the virtual world in real-time and are broadcasted to the LED walls and on the livestream simultaneously around the world.

Logic is built in to prevent people from spamming the chat window and gamify the experience for audiences. For example, if a fan could type Boom into the chat, a chatbot will reply ten more Booms and make a big Explosion! – after ten more people type in Boom, a giant explosion with your festival's logo appears behind the performer.

Fans are united locally and globally to affect the visual content at the show and thus the stream. In essence, tools like Volta not only provide an incredible means to create visually compelling shows but adds game mechanics like in-app purchases and remote user interaction to live events.

Every single show is inherently unique because it is the product of the artist and their fans creating a virtual world together in that moment. The best moments at live shows are when you feel united with the artist and the people around you. Volta empowers you to make the experience as a global community.

In terms of artist adoption, why should they start using Volta?

Research shows that visual effects are the most popular skill musical artists across all genres would like to learn, with 55% of 300 surveyed participants expressing a desire to add it to their repertoire. This is ahead of mastering (50%) and even DJing (34%). Everyone wants to be the next Daft Punk or Deadmau5, but no one realizes they can be with a tool like Volta. We make it as easy as possible to create 3D interactive visual experiences, for free, that sync up with existing artist tooling, meaning there isn't much of a learning curve to outcompete peers at both live & livestreamed shows.

Where can you take this in the future? There's a lot of talk at the moment concerning the metaverse. Do you see Volta playing a more significant role in this space, and do you have further goals and targets you'd be able to share?

We've tried to distance ourselves from calling ourselves a Metaverse company, mainly because the definition encompasses interoperability which we believe is many years from happening. That said, we're far more bullish on all things Web3 and how we can empower artists and fans to take control of their engagement, data, and attention.

Our NFT strategy is centered around the idea of fans owning moments of an experience. Imagine you could own the moment Daft Punk played "Robot Rock" at their 2007 Coachella performance? We're exploring how artists and events can sell the worlds they've created in Volta. As purchasers of that world could then earn revenue from audience interaction, the idea is to create a royalty system that benefits the original creator.

In terms of reality hardware, while we're somewhat bearish on VR, given the lack of seeming B2C demand, we're far more bullish on AR & XR. Even though events and artists might be broadcasting experiences to 2D mediums like LED screens and streaming platforms, Volta still renders an entirely 3D experience. We've future-proofed ourselves to whatever hardware reaches critical mass in the coming years by essentially already being compliant with these technologies. There's no YouTube for 3D, but there is Volta.

To date, what are you most proud of about the Volta project?

The journey to date has been full of "pinch me" moments. It all started when we joined Techstars' Music accelerator in February 2021, which led to artists like Imogen Heap racking up hours of livestreamed Volta content and even led to her creating an official music video with us (much to our surprise!). From there, we won one of TIME's best inventions of 2021, partnered with Beatport, Pixelynx, Anjuna, and Warner Music Group. And we've run a roster of shows with Boiler Room, Deadmau5 at The Brooklyn Mirage, and even for artists like Bonobo and Jamie Jones at the Glastonbury 2022 festival!