Did Gorillaz’s First Virtual Shows Live Up to Its Promise as a Virtual Band? 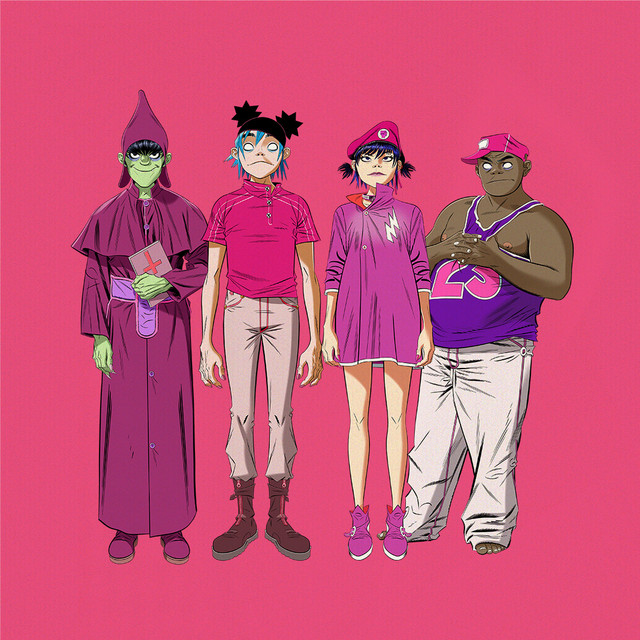 The year is 2001: You’re caught off guard when disembodied voices and a single spray-painted word, “Gorillaz,” hijack your TV signal. The transmission is eerie, a world-shattering cartoon of a music video for a song called “Clint Eastwood.” Fast forward to 2005, when the sounds and iconography of “Feel Good Inc.” become inescapable, even inhabiting commercials peddling cell phone ringtones.

Further still toward a synth-pop-meets-world-music masterpiece, Bruce Willis cameos, globe-trotting tours and even a swing at the big screen - finally to today in 2020, where you’re hiding out from a historic pandemic on your living room couch, watching the definitive virtual band stage their first triumphant virtual concert.

This past weekend, Gorillaz presented Song Machine Live, a series of three unique live performances broadcast over two nights for different time zones. It followed in the footsteps of other acts who’ve taken to the internet amidst the COVID-19 crisis. What separated it from the herd was the promise of the guests and cartoonish imagery that have come to be associated with musician Damon Albarn and illustrator Jamie Hewlett’s long-running project.

Read more: What is the Key to Throwing a Successful Digital Event?

From its inception, Gorillaz sought to be several steps ahead. Conceived as a parody of gaudy MTV music videos from the turn of the century, the project always used technology to push the envelope of what’s possible. Back when the internet wasn’t a flattened out landscape homogenized by big corporations and social media, you could visit the band’s studio and lodgings online. They used the Pepper’s Ghost technique to perform alongside Madonna long before the same illusion principle was used to bring Tupac to Coachella. Most recently, they experimented with virtual reality and phone apps.

Considering the band’s triangulation of art, music, and technology — not to mention the October release of Song Machine, Season One: Strange Timez and the requisite scrapped 2020 live tour — Gorillaz were an obvious candidate to take full advantage of the brave new world of livestreams. However, given the broad range of the group’s output and varying quality of digital concerts by other acts, it was impossible to guess what they’d do under the spotlight.

For much of the band’s lifespan, Gorillaz deployed clever workarounds for why its four cartoon band members — bassist Murdoc Niccals, drummer Russel Hobbs, guitarist Noodle, and Stuart “2-D” Pot on vocals — wouldn’t show their faces for live shows. Their earliest gigs in support of their 2001 self-titled debut saw Albarn and crew situated behind screens and rendered in silhouette while Hewlett’s visuals were projected atop them.

Within the metanarrative told through interviews, music videos, and even the 2006 “autobiography” Rise of the Ogre, the opaque presentation was explained as a unique way for them to incorporate new technology into the live music experience. The reasoning held up under scrutiny — unless you actively enjoy taking the fun out of things, why would you argue otherwise?

For 2010’s Escape to Plastic Beach tour — at the time, the most ambitious international jaunt they’d done — Albarn was joined onstage by The Clash’s Mick Jones and Paul Simonon, Bobby Womack, De La Soul and others in the full flesh. However, each show adhered to the idea of Murdoc and co. being the real band, with interstitials at the beginning, middle and end of each gig displaying the satanic bassist and gang locked in the dressing room, thwarted from performing by the Gorillaz cover act fronted by Albarn.

Since Gorillaz returned in 2017 with Humanz, Albarn, Hewlett and their team’s deference to their animated counterparts has largely fallen to the wayside. The group’s more colorful members haven’t gone anywhere, but the humans have become more overt about being its architects.

The live shows are relatively straightforward. They no longer rationalize the cartoon band’s absence, and there are many more interviews discussing them in fictional terms. Noodle, 2-D, Russel and Murdoc never left, but it almost seems like they’ve become mascots rather than integral to the Gorillaz brand.

One of Gorillaz’s greatest achievements was always its delicate balancing act. How far could the conceit of a virtual band be pushed and preserved? As fruitful as the project’s last few years have been, some of its mystery and intrigue has been sacrificed for practicality.

Given this ebb and flow of commitment, the question that hung over Song Machine Live was whether or not it would lean into the potential of the original idea. Would it take full advantage of the livestreaming medium and stand out from the pack? Or would it rest on its laurels as a presentation of Damon Albarn and his musical friends?

After a prelude celebrating the band’s history, the camera cut to a title card and pre-show tuning from Albarn and co. If there were any suspicions this was a pre-recorded affair, the sound check chatter immediately put that to rest. With a cut to an exterior shot of Kong — the name assigned to several of the band’s headquarters over the years — it became clear this was not a conventional 2020 livestream.

Following the intro of the “Song Machine Theme Tune,” the show kicked off with “Strange Timez.” Questions as to what’s real and what’s not are inherent to Gorillaz, and it was initially difficult to separate the authentic from the artificial. With the help of six backup singers and a proper backing band featuring longtime collaborators Jeff Wooton and Remi Kabaka on guitar and drums respectively, Albarn seemed all too happy to cede the vocal limelight to goth icon Robert Smith. It was unclear at first whether The Cure frontman had been green screened in or not, but by the time the song ended and he’d shared a hug with Albarn, it was apparent he’d been fully present.

At first, the show was shaping up to be Damon Albarn & Band ft. Gorillaz visuals and songs. The 52 year-old singer-songwriter bounded about with all the gravitas of a frontman half his age, frequently mugging it up for the camera and dominating its attention. But as with all great shows, Song Machine Live gradually revealed its hand. The next tune, “The Valley of the Pagans,” featured a surprise assist from Beck in hologram form.

The show proceeded to alternate between holograms (or force ghosts, astral projections — whatever you want to call them) and physical walk-on parts for the remainder of its running time, visuals projecting behind them all the while. No matter their manifestation, both the flesh and blood guests and digitized cameos contributed something to the greater whole. However, there’s always something to be said for the physicality of interplay. Lee John’s swagger during “The Lost Chord” was an early highlight, and it was a music geek’s dream come true to see Albarn share the stage with New Order bassist Peter Hook for “Aries.”

The tension between the show’s material and immaterial figures extended to its deft setlist pacing. The tangible rowdiness slowthai and Slaves evoked out of Albarn during “Momentary Bliss” contrasted nicely with the subsequent melancholy and grace of Fatoumata Diawara’s hologram throughout Song Machine standout “Désolé.”

This push and pull also applied to the purported brains behind the Gorillaz operation. Unlike the live shows of recent years, Song Machine Live honored the idea that Murdoc and crew are just as real as the people who dreamt them up -- they just prefer to leave the hard work of live showmanship to their collaborator Albarn.

The performance featured several interludes framing 2-D and Murdoc as the show’s live sound engineers (“Ahhhh, this is the life! The puppets do all the hard work while the puppet master saves his energy for the afterparty.”), and the two of them popped up alongside Noodle and Russell for fully-animated appearances both on and off-stage.

Song Machine Live bolstered its well-produced spectacle by ratcheting up the emotional resonance for the show’s final stretch. Comedian and English national treasure Matt Berry assumed the part of late-band collaborator Dennis Hopper to deliver the spoken word vocals of “Fire Coming out of the Monkey’s Head,” a fable about the dangers of imperialism and exploitation written at the height of the Iraq War.

Afterwards, Albarn dashed off stage — all the while hamming things up James Bond-style with a blue toy gun in hand —for a change of scenery. Now backed by a much smaller group and situated in a more austere red-hued room, he launched into “Dracula,” a Gorillaz deep cut not performed live since 2002.

The intimacy of the song choice and surroundings laid the groundwork for the one-two punch of “Don’t Get Lost in Heaven” and “Demon Days.” The tunes’ meditations on disillusionment, false promises and widespread lies proved as affecting in 2020 as they were 15 years ago. As if there hadn’t been enough surprises already, Albarn brought out Sweet Irie for a performance of the “Clint Eastwood” refix that punctuated the first Gorillaz record.

Whether you caught the first, second or third show, Song Machine Live proved to be a worthy addition to Gorillaz’s forward-thinking body of work. It was impressive enough that the group was able to innovate on a fledgling medium mostly using songs that were only released this year and have been untested live. It was another thing entirely to eke out real emotions and awe from what could’ve been an impersonal presentation.

Gorillaz has a big leg up on other musical acts: It can speak in two universal languages. Very few if any bands have married music and visuals in the singular manner this group has managed. Even after two decades, several beloved albums, and a millions-strong intergenerational fanbase, Song Machine Live feels like a new peak, a definitive fulfillment of the lofty promise inherent to the virtual band’s concept. During unprecedented times, it only seems right that a one-of-a-kind band could pull off the miraculous.